The show received the following email from Cara in Medford, OR.

“The person I’m nominating is my mom. Her name is Rachael and she’s turning 38. Before I was born she served in the military and suffered multiple traumatic injuries leaving her unable to work. A couple years later when I was one, her husband (my dad) got diagnosed with cancer due to chemicals in an IED explosion and he passed away which as worsened her PTSD. For the longest time it’s just been me and my mom and my little brother but recently things have been taking a turn for the worse I have been covered financially by my dad and grandparents, but due to her disabilities, my mom is unable to work which has put us in a bad place financially. In the last couple months we’ve struggled to pay bills. I’m 17, working a full job and a full time high school student about ready to move out. A couple weeks ago, her car got repossessed and it seems like there isn’t anything I can do to help. My mom is my biggest role model besides the fact that she’s let me listen to your radio show for as long as I can remember. But we both love listening to your show and always talk about it multiple times a day. Her birthday is coming up and I would love anything that can make her smile she deserves the world and has done so much for our community.“

This sounded like the perfect opportunity for Idiots for Underdogs to step in! So, thanks to the generosity of our new friends at Lithia Toyota of Medford, recon work from Brian at 96.9 The Rogue and, of course, YOU, the Fancy Idiots, we were able to give Rachael a $20,000 budget and she’s now behind the wheel of a 2017 Mazda 3 Touring Hatchback, with zero out of her pocket! 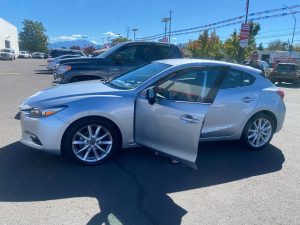 If you’d like to hear the big reveal when we called Cara and Rachael, check out the video below!

If you feel as moved as we did and want to help us help more Underdogs, become a Fancy Idiot or donate to Idiots for Underdogs now.